It’s the 26th week of the year and the card of the week is the 3 of Pentacles Reversed. If you everything seems like it’s falling apart realize it’s actually falling into place. Under this card, nothing with a weak foundation lasts.  The number of the week is 8, a number of karmic changes.
Mantra: “And castles made of sand, fall into the sea, eventually.” — Jimmi Hendrix “Castles Made of Sand.”
Card Artist: Holly Broxson 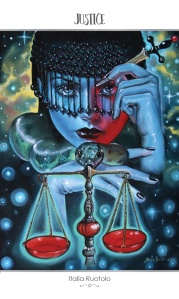 Monday 06/25/18 Justice
Numerology: 6
Moon in Sagittarius
Card Artist: Italia Ruotolo
Justice is a card of equal and opposite reactions. Every choice you make has a consequence but those consequences will most likely be positive due to the auspicious Venus square Jupiter transit today at 10:19 A.M. PST is a time to shower whatever needs love and peace with that energy. Everything done under this transit will become a fair exchange. This is a good time for love and friendship. The only problem with this transit is that you may want to play and not work at all today. It’s best to take advantage of this auspicious transit and settle all quarrels with those you love before Mars stations direct tomorrow. Moon sextile Mars at 3:32 P.M. PST will give you the ability to work with others to solve problems. This is a transit under which you will be able to attract the respect of others due to your courage and self-reliance. The Moon is in the positive, energetic sign of Sagittarius today so even heavy matters will be approached with a lighthearted attitude. The number of the day is 6, a number of victory.
Mantra: Balance things out with love. 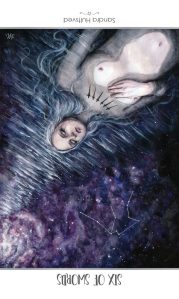 Tuesday 06/26/18 6 of Swords (Reversed)
Numerology: 7
Moon in Sagittarius
Moon Void of Course 5:54 A.M. PST
Card Artist: Sandra Hultsved
The 6 of Swords upright is a card of moving on and reversed it has the opposite meaning. No matter how hard you may be trying to move on from something, you simply can’t because there is still a lesson to be learned here. Moon trine Venus at 1:49 A.M. PST is a transit under which to celebrate love and beauty. Moon square Neptune at 5:54 A.M. PST is a transit of illusions and fantasies. Let go and see what you find in the murky depths. Mars stations retrograde in Aquarius at 2:05 P.M. PST until 8/27/18. According to Astrology King, this will be a time that could lead to sexual frustrations if you have unfinished romantic business with someone. Think before you act because karma works in cycles. Your goal during this time should be to explore your egos flaws in order to gain confidence. This is a great time to engage in all forms of physical activity in order to burn off some of the pint up energy this transit may foster. The Moon is still in the optimistic sign of Sagittarius so keep on the bright side. The number of the day is 7, a number of ineffable mysteries.
Mantra: Until the score is settled you will still be bound.

Wednesday 06/27/18 5 of Wands (reversed)
Numerology: 8
Moon Enters Capricorn 8:52 A.M. PST
Full Moon in Capricorn 9:53 P.M. PST
Card Artist: Shelby Nichols
Upright the 5 of Wands represents jumping into needless conflict but reversed this card expresses the other extreme: avoiding conflict at all costs. There is a happy medium to be reached here because avoiding problems, just like creating them, doesn’t solve anything. Sun opposition Saturn at 6:28 A.M. PST is a transit that reminds us not to succumb to the expectations of others. There may be some frustrating delays to get what you want and you may have to make some compromises but if you’re honest and true to your heart, then this transit will be favorable for you. Moon trine Uranus at 12:40 P.M. PST is a transit of revolutionary actions. You may be surprised at the outcome if you decided to try to set things right. Sun opposition Moon at 9:53 P.M. PST brings the climax of this lunar cycle with the Full Moon in Capricorn. You’ve worked hard for this outcome and you deserve it. If your expectations fall flat, as yourself why. The Moon enters the sign of the teacher, Capricorn, at 8:52 A.M. PST. What lessons have you learned? The number of the day is 8, a number of karma.
Mantra: “I am not what has happened to me. I am what I choose to become.” – Carl Jung 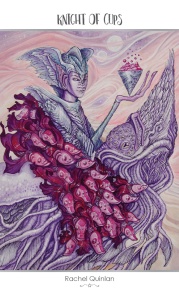 Thursday 06/28/18 Knight of Cups
Numerology: 9
Moon in Capricorn
Card Artist: Rachel Quinlan
The Knight of Cups is a lover that takes his time getting where he’s going. He is smooth, sensual and enjoys the journey. He expresses himself best creatively. If the Knight doesn’t represent you, it represents someone you may come into contact with today or a situation that may manifest. Moon sextile Jupiter at 12:13 P.M. PST is a transit filled with optimism and good cheer. Moon sextile Neptune at 6:07 P.M. PST is a transit that will awaken your psychic ability. Pay special attention to what your initial feelings are during any events that transpire during this time. Mercury enters the fiery sign of Leo at 10:17 P.M. PST where She will stay until 09/05/18. When Mercury is in Leo, the truth will be illuminated through noble acts. People may be dramatic and outspoken but not without reason. You may feel like you have the confidence of a movie star and the eloquence of a poet. This is a time to attract well deserved attention but don’t let it go to your head. The Moon is still full in the grounded sign of Capricorn so despite the laid back attitude the Knight brings, you will have a firm grasp on reality. The number of the day is 9, a number of near completion.
Mantra: My cup is filled with love and my heart with passion.

Friday 06/29/18 10 of Pentacles
Numerology: 1(0)
Moon Void of Course 1:57 A.M. PST
Moon Enters Aquarius 9:37 P.M. PST
Card Artist: Gila von Meissner
The 10 of Pentacles is a card of abundance and completion. You have achieved what you wanted and now you can bask in success. Moon conjunct Pluto at 1:57 A.M. PST is a transit of intense emotional experiences. You need to reach deep into your psyche and pull out the energy that has been swirling there. It may be overwhelming but this is the only way you’ll be able to see that you’ve already arrived at your destination. If you learn to let go of your obsessions and allow yourself to manipulate your own reality then your head will stop spinning and you will see you’ve arrived. The Moon goes void of course in Capricorn at 1:57 P.M. PST then enters Aquarius at 9:37 P.M. brings revelations through lessons that were hard to learn. The number of the day is (10) and so is the card of the day. Expect major new beginnings.
Mantra: Take life however it is. Take yourself however you are. 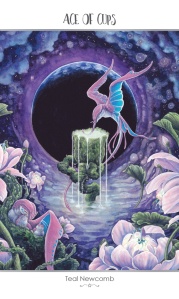 Saturday 06/30/18 Ace of Cups
Numerology: 2
Moon in Aquarius
Card Artist: Teal Newcomb
The Ace of Cups is a card of overflowing love. Moon opposition Mercury at 1:01 A.M. is a transit of conflict between head and heart. This could cause a conflict at 1:37 A.M. PST that shakes things up a bit. If you’re alseep during these transits, these themes could appear in your dreams. Mercury square Uranus at 6:01A.M. PST brings the need to slow down. Even if it feels like you’re on a runaway horse, you’re in control, whether that means taking action or doing nothing at all. The choice is yours. Moon conjunct Mars 4:10 P.M. is an irritable, pugnacious mode. If you feel like you had to make a sacrifice, know that this is your choice. The number of the day is 2, a number that cautions not to move too fast with anyone today. Nice and slow is the way to go. However, remember also that the tension builds with the Moon in Aquarius so the slower you go the harder the harder you fall.
Mantra: Would you fall in love if you chose how you fell? 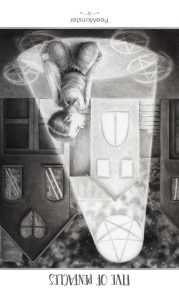 Sunday 07/01/18 5 of Pentacles (Reversed)
Numerology: 1(0)
Moon Void of Course in Aquarius 3:56 P.M. PST
Card Artist: Stefania Russo
Upright the 5 of Pentacles is a card of being shut out but reversed it is a card of allowing yourself to embrace the comfort you’ve been craving. Moon square Jupiter at 1:03 A.M. is a transit that brings with it a kind of foolish confidence. Beware of Moon opposition Venus at 3:56 P.M. PST can find you spending too much money. Have a good time but don’t get carried away. The Moon goes void of course in Aquarius at 3:56 P.M. PST bringing more revelations that are ground shattering. The number of the day is 1(0), a number of endings becoming beginnings.
Mantra: Let the light shine within you.

Magdalena Tarot does not claim the rights to any of the Tarot card images used here.  All Images are from The Astral Tarot by 78Cards. Individual Artists are credited on each card.