Where There is No Night Series

Chapter 0: The World by Snow Torres

Chapter 1: The Hanged Man by Fire and Fang Studios

Chapter 3: Ace of Swords by Fire and Fang Studios

Chapter 4: 10 of Pentacles by Snow Torres

Chapter 5: The Moon by Fire and Fang Studios 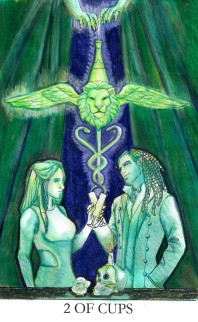 The 2 of Cups by Snow Torres

STORY SUMMARY: Sex, drugs, music and the Apocalypse. In 2035, angels and demons face off to win control of the last days. Their weapons of choice: music and magic.

Darius Seifer, son of the Devil and heavy metal king has it all: fame, fortune, beautiful women and a drug empire. But the only thing he really wants is for the international pop sensation, Arella Briaut, to fall in love with him.

When he finally meets Arella in Tokyo, he invites her to an underground club because he wants her to perform with him. What he doesn’t tell her is that he also plans to drug her in hopes that she will fall for him while she’s under the influence.

However, Arella has a secret of her own.  She is actually Archangel Gabriel and she’s been sent by Heaven to ask Darius to reject his role as the Anti-Christ. She hopes he will agree to a peace treaty and abdicate. If he doesn’t, she’ll have to kill him.

Plans on both sides go awry and soon the wrath of the Apocalypse is released upon the earth. Arella and Darius form a bond in the midst of the chaos and become unlikely allies.

But Heaven and Hell both reject their allegiance. Friends quickly become foes as Judgement Day draws near. Now it’s up to the Romeo and Juliet of above and below to show each side that peace is possible or die trying.

ABOUT THE PROJECT: THE LAST MOMENTS BEFORE DUSK is complete at approximately 95,000 words. It is the first book in the mystical drama, WHERE THERE IS NO NIGHT. The story is like Supernatural meets Sailor Moon. It is based on themes found in mystical Qabbalah, Masonic lore, and Rosicrucian principals. Enshrined in it is a deep symbolic message about the return of the goddess. This work received 4 rewrite and  resubmits from four different, midsize publishers. This story was scouted by several agents, including an agent with the notable Bent Agency.

After years of trying to figure out how to make this sell, I was  told by a writing group of award winning Colorado writers that it should be a graphic novel. I played with the idea and started story boarding. It took a few years of brain storming but I came up with something dynamic and built an artistic team that is helping manifest my dream.

Watch the world end with us.

This is a huge undertaking because it’s so expensive to hire an independent artist. I’ve invested a lot of money in the images we’re creating, but if I can build a fan base through the original Tarot cards we’re creating to accompany the novel text, I believe it is only a matter of time before we break into the comic industry. It means a lot to me to be a patron of the arts while bringing my story to life. I will be honored if you decided to support this project and the thanks will continue to come back to you in fan service throughout the journey. Thank you for believing in my dream.

More clues as to what to expect from the series can be found on my Pinterest.

10 thoughts on “Where There is No Night Series”