Magdalena Tarot: We’ve seen the Atomic Pixies work on Magdalena Tarot. What inspired this deck?
Atomic Pixies: Our head artist grew up in the metaphysical world, and all three pixies have felt themselves pulled to the tarot deck and its symbolism. Add that to the fact that working in art nouveau style calls to Tarot collectors, plus our customers were asking for one. So It seemed a natural project to tackle. We actually went back and forth on ideas for the deck, including doing a fanart nerdy deck (Which I would still love to do…maybe only major arcana this time around), and this one was the one that sparked the most ideas and passion. All of these themes show up in our work over and over, so it seemed a natural world to explore.

MT: The suits are a bit different than the traditional Tarot. What led you to choose the suits that you did?
AP: We wanted to do something that held the same structure as the decks people may be familiar with using, but that related more to the concept of our deck. We broke down the meaning of each suite and tried to think of what best matched from the world we were pulling from. For example, pentacles is traditionally concerned with work, home…material objects and the world you create around yourself. We felt bees related to this suit because they are the most important pieces of our environment. They are hard workers who build the foundation for which all life on this planet is based. So we found them a to be a compelling symbol for the ideas embodied in the suit of pentacles like home, wealth, etc.

MT: One thing I love about this deck is the diversity found in the images because diversity is sometimes Tarot lacks. Your deck features people of all different body types, races and even sexual preferences. What led you to create such a diverse deck?
AP: I think, when you make something that isn’t diverse, you are really cutting off your nose to spite your face. Humanity comes in such a wonderful huge variety of people, and if you don’t touch on that, not only are you limiting the world, you limit yourself and the stories you can tell. Each of these characters in this deck is a rich, full person. If we limited them to only our life and experience, no matter how encompassing they may be, we are still leaving so much of the human story on the cutting floor. It’s like going to the best buffet on earth and only eating the pot roast.

MT: You talk a little bit on your webpage about the relationship of science and metaphysics. Can you tell us a little bit more about that?
AP: We use the quote by Arthur C. Clarke, “Magic’s just science that we don’t understand yet.” I think that really sums it up for us. The world is so much bigger and more complicated then we understand. That means that many things that seem “magical” to us right now are just processes we don’t (and maybe even can’t) understand. That doesn’t mean they aren’t real, and that they don’t affect us. It also doesn’t mean they don’t interact with us in the same way everything else in the natural world does. Much of what we have now would seem like pure magic to someone from a millennia ago, and in another millennia (as long as it continue forward in a good way) we won’t be able to recognize what science looks like. 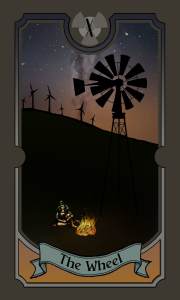 MT: What card do you think illustrates the relationship between science and metaphysics best?
AP: The wheel. You have our fool hunkered down in a field by a fire, while she is dwarfed by these huge machines, and beyond that the vastness of the milky way spread above her. She is so small, but still so important, surrounded by all these pieces of this universe that do and don’t make sense in her world.

MT: What was the biggest challenge you faced creating this deck? How did you overcome it?
AP: Just DOING it. 78 is a lot of cards. And it’s a lot more when you’re on card 42 looking down the rest of them. I say it never would have been made without Kickstarter, and that isn’t just about the literal money issues. It was also the fact that we had a group rooting for us and invested in the project. That made me able to push through on days when 78 cards felt like 7800 cards.

MT: What card (or cards) did you enjoy creating the most? Why?
AP: Oh that’s hard. So many of these cards became so personally important to us. I think my personal favorite is the wheel, again. It hits a lot of what we were trying to get with this deck so perfectly, it’s both small and big, and has so many levels of symbolism in it without feeling too busy or cluttered. The two of tides is also one of my personal favs not for any deep reasons, but just because I love the image of it.

MT: You guys are also graphic artists and illustrators and I’ve found sometimes your deck reads like a comic book. Was that intentional?
AP: We definitely have a more narrative take on our work, and there is a story in each card for sure, as well as the Fool’s journey through this landscape. I don’t know that we intentionally set out to do that, but when you become so involved with a project, it takes on a life of it’s own.

MT: Are there any future projects you have planned you’d like to tell us about.
AP: Right now we are working both our webcomics. We have one currently, Rendezvous, which is about half done. It you enjoyed the deck, it should be up your alley. It is a story of 5 friends stuck away from home in the American Southwest choosing what to do once they realize the world is coming to an end. We’re also working on building up pet portraits in our business, on a very different angle. You can find out more about both at http://www.atomicpixes.com

MT: What do you have to say to your fans?
AP: We love you guys. We literally could not have gotten here without you. Especially with this deck, the support through Kickstarter and social media is what got us through. Without that it would have never been more than a twinkle in our eye. But every time we got burned out or too tired, we knew there was a crowd cheering us on and were able to push through. 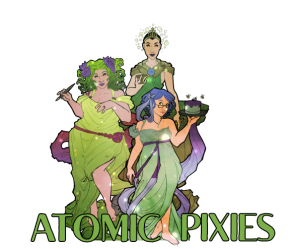 The Atomic Pixies for have been a team for about five years . They are the creators of the Atomic Tarot and are credited with developing the style of Art Nerdveau.
Terra: lead artist, line artist, colorist, social media guru, radiation expert
Sarah: lead designer & writer, background artist, space nerd
Be: manager, colorist, writer, designer, chef