Interview with 78Tarot, the creators of the Astral Tarot 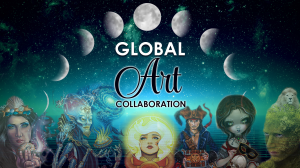 I found the Astral Tarot, the last Magdalena Tarot at Mind Body Spirit Fair in Denver. I loved the cosmic , sci-fi feel and the graphic novel style art. I also loved how each deck features a different artist’s artwork and I found so many amazing artists from using this unique deck. I took some time over the summer to catch up with the 78Tarot team to find out more about what went into creating the their brand.

Magdalena Tarot: The 78 Tarot Team runs a pretty expansive project. How did you guys dream up the idea of having a different artist illustrate a different card and how did you pull it together to make it work?
78 Tarot: The 78 Tarot project started as a late night chat among artists in a marketing group. A few friends talking about how creating a Tarot deck was a dream, but so much work to do, to create 78 card images WHILE creating enough art to pay the bills. Kayti wondered, if you split the work, if you had enough artists to create one image per card, if it was an achievable dream. So she asked friends if they’d be interested. Word spread via social media and within days, there were more than enough artists interested! So we started a Facebook group, some social media pages and Kayti asked Trish to get involved with the social media side of things. And then the images started coming in, and we talked about how to get it printed…Kickstarter was really starting to take a hold, so we tried raising the funds for printing and shipping on Kickstarter, and it made it! We asked the fans if there was enough interest for a second deck, and what theme they would pick (we gave them a choice of 3 – Nautical, Carnival and Celestial)…and so the idea for Nautical was born. And Carnival, as the vote was so close we wanted to do both. Celestial became Astral, and the we chose the theme for our most recent deck, Mythical!

MT: Who are the members of the 78 Tarot Team and tell us a little about each of them.
78T: The 78 Tarot Team are a group of friends who’ve known each other online for over 15 years…brought together by LiveJournal in the early noughties!

Kayti Welsh Stewart is our Founder & Director.
As above, Kayti is the brain child behind the 78 Tarot project, coming up with the idea and driving it into a successful project that has been running for 5 years now. She began her art career in fantasy art, and when the 78 Tarot Project, was working as a graphic designer working for lots of artists and small businesses, helping them build their brands from concepts into fully functional websites with a solid logo and brand behind them. She brings a wealth of experience and artistic creativity, designing card backs, sometimes creating a card within the decks, and also working on graphics and promos for artists and the project itself. Kayti is in charge of websites, marketing, logistics, and the Kickstarter itself. Along with all that, each and every deck that is shipped comes straight from her home, lovingly packaged by her.

Trish Sullivan is our Media Manager & Author & Tarot Reader.
Trish Sullivan is a Tarot reader, Reiki master, photographer and social media manager who was working with small businesses, building social media platforms and audiences for them when Kayti contacted her to ask for her help in building an audience for the 78 Tarot Project. Trish jumped at the chance, and is the voice of 78 Tarot on social media. She writes all our books (currently working on the sixth) and does a daily 3 card draw for us on Facebook and Instagram. She also works with fellow admin Joanna Nelson on Joanna’s Tarot and Oracle Decks (Monstarot, Cat Land, and soon to be the Whispering Spirits Tarot) and is also (when she can fit it in) writing her own Tarot book and Deck!

Joanna Nelson is our Artist Liaison.
Joanna is our go-between all the artists, and the lightning fast collector of media and information for the books and social media. Working and communicating with so many artists at one time is difficult but Joanna makes it super easy. When she’s not chasing artists she’s working on her own Tarot decks, having published Monstarot and her solo Cat Land Oracle deck.

MT: What is the biggest challenge of running a project like this?
78T: That depends on whose point of view, really. Kayti would say it’s the printing and shipping process. We did a lot of leg-work and research along the way, but only found our perfect printer on the Astral deck. All of the books are beautiful, but Kayti is a perfectionist, and so is our current printer. So each deck takes weeks, if not months of back and forth once the images are all sent across to perfect templates, and the teeniest details. And then once it arrives, Kayti has to ship hundreds of decks solo – it’s so much work that we’re hoping to get Joanna and maybe even Trish over to help this year, rather than end up with an exhausted Kayti!

For Trish it’s ever harder to reach our audience, with social media algorithms fighting us every step of the way. And the writing 😉 Mythical provided more fun and challenges at the same time, as Trish not only had to write the Tarot book, and edit artist interpretations, but also write a small introduction to each Myth used within the deck….more writing but Trish’s favourite subject, so fantastic to do! And Joanna regularly contacts 81 artists….so that’s definitely a challenge all in itself!!!

MT: Each deck has a theme and the theme of the deck Magdalena Tarot is using is the Astral Tarot. What inspired this theme?
78T: Celestial was also popular, but there were a few similar themed decks, so we wanted to take it a bit wider, and go Astral, giving us the flexibility to go wild in space. We have everything from celestial goddesses to space warriors on rocket ships. 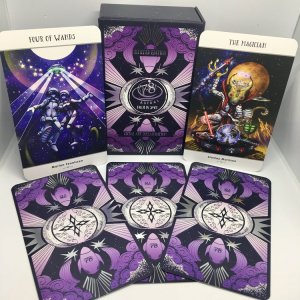 MT: The 78 Tarot Team uses Kickstarter to fund the production of their decks. For those out there thinking about using Kickstarter, what makes a successful Kickstarter campaign?78T:Kickstarter is all about your fans. You have to interact, you have to realise that these wonderful people are giving their hard earned cash to help you achieve your dreams. We looked into it a lot on our first Kickstarter and so much of the advice we read was not to ask, was not to use words like “help” because that seems needy. But it didn’t make sense to us…the Kickstarter backers are helping, they are doing SO MUCH to help not only us but the artists we’re working with achieve dreams of being published Tarot artists. So speaking directly to the backers, to the fans is important to us. Even Trish who is deathly shy will get on camera for the Kickstarter. And thanking them…there are small ways in which you can build thank yous into the budgets, Kickstarter only stickers or postcards. Bragging rights, so to speak. We also hold events sometimes to give a platform for our artists to interact with fans too, with anything from Selina Fenech running a giveaway to prizes for the best fan clown mask, to Mission Control type videos from Kayti. Sometimes it’s fun, sometimes it’s silly, but it’s 100% heart felt. And I think that’s what has fans coming back – our Kickstarters are more than asking for money, they’re an experience.

MT: You guys get to see a lot of artwork by international artists through the submission process. For artists who may be interested in submitting artwork for a future deck, what appeals to your Team the most when selecting artists?
78T: An understanding of Tarot goes a very long way! Trish is on hand to work with any artist who wants to chat Tarot imagery before our artist creates their piece, but it is a massive help to have a group of artists who understand a bit about Tarot to start off, who understand the point of view of a reader, who wants a deck that is cohesive, not jarring.

MT: Tell us a little bit about what kind of projects and products are coming next from 78 Tarot?
78T: We’re currently collectively working on an Elemental deck. Artists are already chosen, and working in a secret Facebook group and with Trish, some are already done! Each admin is also working on her own project too. Kayti’s just funded Animantras, a chakra based oracle deck, Joanna is working on Whispering Spirits Tarot, and both are about to launch a scarf line via Kickstarter. And Trish is writing for Joanna, for 78 Tarot and for herself 

MT: A couple of extra cards were added to this deck. Can you tell us a little bit about them and why you added them?
78T: We added two wild cards to the very first deck. Wild Fate and Chosen Fate were two additional cards, and proved popular additions, and since then we’ve kept two wild cards that are exclusive to each deck. Whimsy and Curiosity for Nautical, Foresight and Equilibrium in Carnival, Barriers and Event Horizon for Astral, and The Dragon Tamer and The Guardian in Mythical. We also added a Meditation card in the Nautical deck, and have kept this card in each deck going forward, each time created by a different artist.

MT: You guys have put out 5 decks this far. Do you have a favorite deck? If so, why is it your favorite?
78T:Each time I think this is my favourite deck. 1st Edition was amazing to me, a first, I loved some of the art created for cards, and it was the first time we did it, the dream come true the first time. Nautical was stunning and I’m a huge fan of water, so it really appealed on that level. Carnival was a fun ride, the colour palette is stunning and if I was to choose my favourite cards across the 5 decks, it has some of them. Astral is similar in that respect. Each time we learn something, artists work even better together, some of the artists deliberately using similar colour palettes to add continuity to the decks. For a while I thought Mythical would be the last favourite. It works to my loves, I’ve been a giant myth nerd since I visited the Acropolis at the age of 6 and it was amazing to work on with the artists. Some old loves in terms of stories, and because we have such a diverse group of artists, and fans, some new legends I’d never even heard of!

MT: What do you have to say to your fans?
Thank you. For the love, for the support, for the way in which we see the same people come back each time for Kickstarters and to tell us what they love, where the artists shine, and what we can do better next time. For the core fans who follow us on social media despite corporations making it harder to see, and who interact with us. There are crappy days in life, we all have them, but each day someone will thank us or make a comment via private message or on the Facebook page/IG feed that makes you realise again and again why we do this. Why we create decks, why Kayti works so hard sending these out all the time, why Trish does three card draws every day. It’s magic.

Keep in touch with 78Tarot online!