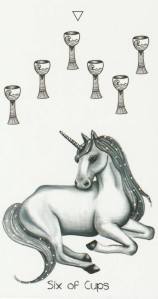 It’s the 34th week of the year and the card of the week is the  6 of Cups. In the middle of the week you will come into some knowledge that has been building for a while. Mars stations direct on Monday and as tensions lift, things will start to make sense in regards to  relationship.  The number of the week is 7, so if there seems like there’s magic in the air, you’re probably right.
Mantra:  Welcome home.

Monday 08/27/18 4 of Pentacles
Numerology: 1(0)
Moon in Pisces
The Four of Pentacles is a card that appears when you have just enough because you’re too blind to see that you could have so much more. Moon conjunct Neptune at 5:05 A.M. PST is a transit of sensitivity and empathy. Just because you don’t agree with someone doesn’t mean you can’t be kind to them. Mars stations direct in Capricorn at 7:05 A.M. PST after being in retrograde motion since 06/26/18. While Mars was in retrograde, you may have been asked to confront unresolved sexual tensions with people. This period was meant to teach you about thinking things through and figuring out why previous relationships have failed. Now that Mars is direct, the lessons you learned will benefit you moving forward. Moon trine Jupiter at 7:25 A.M. PST is a transit that will find you waking up on the right side of bed because the tension has lifted. Moon sextile Pluto at 12:13 P.M. PST will reveal the truth behind those hidden feelings that caused the tension but in a way that will make you want to change. Mercury square Jupiter at 10:31 P.M. PST will find you winding down the night with a better understanding of what you’ve gone through. Although you may feel really good about what happened, be careful what you wish for, you just might get it. The Moon is in the mysterious sign of Pisces all day long so if your intuition jumps like a fish, you can try to catch it or let the inspiration slip away The number of the day is 1(0), a number of endings becoming beginnings.
Mantra: Loosen up.

Tuesday 08/28/18 5 of Swords
Numerology: 2
Moon Void of Course 6:54 A.M. PST
Moon Enters Aries 9:35 A.M. PST
The 5 of Swords is a card that appears when it’s time to cut your losses. Although things seemed to fall into place yesterday, you’ll find the opposite reaction of that today. Moon trine Mars at 6:54 A.M. PST is a transit that brings high energy, leadership and bravery. Be careful because your confidence could shine the light on the insecurities of others. Don’t use what you learn against them. Moon square Saturn at 2:37 P.M. PST may find you down in the dumps because the good feeling from the break in tension is fading. Settle down, we’re just adjusting to a shift. The Moon is void of course between 6:54 A.M PST and 9:35 A.M. PST when She enters the Mars ruled Aries. Recognize your power and act accordingly.
Mantra: Is it really worth it?

Wednesday 08/29/18 3 of Pentacles
Numerology: 6
Moon in Aries
The 3 of Pentacles appears to bring the messages from the two days before together. Now is the time to give yourself the space you need to process what has happened. You will see where the work needs to be done but all great work takes time. Moon square Pluto at 9:53 P.M PST will allow you to take some time to confront your emotions and figure out what you really want. Moon trine Mercury at 10:02 P.M. PST will help those feelings find a voice. The Moon is still in the fast paced sign of Aries so take note of anything significant that happens before it passes you by. The information will be useful for later. The number of the day is 6, reminding you that a chance can slip away in the blink of an eye.
Mantra: Rome wasn’t built in a day.

Thursday 08/30/18 2 of Pentacles
Numerology: 7
Moon Void of Course 4:04 P.M. PST
Moon Enters Taurus 6:30 P.M. PST
The 2 of Pentacles appears on the last day of Mercury Retrograde Post Shadow Period. Things have been topsy turvy but they’re calming down. Moon opposition Venus at 3:56 A.M. PST is a trasit that may find you desperately seeking love, attention and validation like a performer. But don’t try too hard because your desire for connection may upset someone during Moon square Mars at 4:04 P.M. PST. Moon conjunct Uranus at 10:05 P.M. PST is a transit that may cause a little bit of restlessness but by Moon trine Saturn at 11:17 P.M. PST, you will be grounded by logic and realize that a lot of the anxiety you are experiencing is all in your head. The Moon is void of course between 4:04 P.M. PST and 6:30 P.M. PST when she enters the sturdy sign of Taurus. Steady your feet.
Mantra: You’ve got this.

Friday 08/31/18 Ace of Pentacles
Numerology: 8
Moon in Taurus
The Ace of Pentacles is a card that appears when a seed is sprouting. Everything you want to create is just one action away from being brought into reality. Moon trine Sun at 9:42 A.M. PST is a transit of happiness, harmony and flow. Taking action will not be a problem for you. Moon sextile Neptune at 10:33 P.M. PST may be hard on the empathetic because you will be absorbing the feelings of those around you. Stay focused and know what is yours from what is someone else’s. The Moon is in the fertile sign of Taurus so water the seed and watch it grow. The number of the day is 8, a number of karma.
Mantra: Potential lies between what is and what could be. 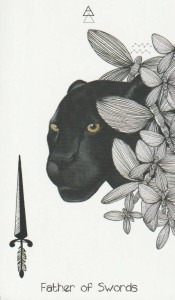 Saturday 09/01/18 King of Swords
Numerology: 3
Moon in Taurus
Moon Void of Course 10:56 P.M. PST
The King of Swords is a card that appears when you need to have your head on straight and your reason as sharp as a sword. Moon opposition Jupiter at 2:06 A.M. PST that may cause your mind to feel restless. Treat yourself with compassion and let your mind rest at ease. If you are asleep during this transit, this feeling may appear in your dreams. Moon trine Pluto at 5:15 A.M. PST is a transit that intensifies emotions. If you have a lover, it will be a good time to enjoy each other’s touch. Moon trine Mars at 10:56 P.M. PST is a transit that will help you face whatever it is you need today with courage and bravery. The Moon is in Taurus all day but does go void of course at 10:56 P.M. PST Get outside and enjoy nature today. The winds of change are calling. The number of the day is 3, a number of putting the pieces of the puzzle together.

Sunday 09/02/18 7 of Cups
Numerology: 4
Moon Enters Gemini 1:02 A.M. PST
Last Quarter in Gemini 7:37 P.M. PST
The Seven of Cups appears when you are being blinded by all your choices. The Last Quarter in Gemini finds your decision split as to whether you should push forward or start planning for the next lunar cycle. The number of the day points to going with the safest decision because what is not accomplished on this lunar cycle can most likely be dealt with during the next one.
Mantra: Some risk are best taken calculated.

Magdalena Tarot does not claim the rights to any of the Tarot card images used here. All images are property of Jillian C. Wilde from the Naked Heart Taort