It’s the  36th week of the year and the card of the week is the Hanged Man. If you feel life just keeps you hanging on, the number of the week is 9, a number of near completion. Things are wrapping up and the end of the year is drawing near. There is a feeling that things it’s getting late and that darkness is drawing near. It’s a good time to put things to snuggle up and let things rest.  The days are getting shorter in the Western Hemisphere and the shadows are getting longer. It’s time to reflect what the light has shown us as dusk draws near. Uranus, Neptune and Pluto are all in retrograde, bringing under worldly waves crashing to the shore.
Mantra: I pause and honor the here and now

Monday 09/10/18 Temperance
Numerology: 3
Moon Void of Course 8:12 A.M. PST
Moon Enters Libra 8:20 A.M. PST
Mars Enters Aquarius 5:56 P.M.
Temperance is a card that appears when patience is needed. Even though you may not have exactly what you want now, you are blessed in each and every moment. Moon trine Mars at 8:12 A.M. PST is a high energy transit. However, you may be dragged down by Moon square Saturn at 12:34 P.M. PST. Mars Enters Aquarius at 5:56 P.M. where he will stay until 11/15/18. When Mars is in Aquarius people may be willing to give anything a try if it means accomplishing their means to an end. This is an innovative time that has the ability to teach those who seek to learn lessons about independence. If an old pattern is challenged, you may feel inclined to change it just to prove someone wrong. It may be hard to stick with projects but if you get the ball rolling then it will make it to the finish line. Fun and freedom is the name of the game, also in romance. However, if you get hooked on someone during this time, as long as you keep things interesting your partner should stick around. The Moon goes void of course briefly in the picky sign of Virgo between 8:12 A.M. PST until 8:20 A.M. PST. Then She enters the justice oriented sign of Libra. The number of the day is 3, a number of things falling into place.
Mantra: Be patient, it’s all coming together. 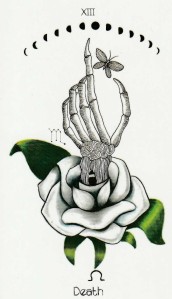 Tuesday 09/11/18 Death
Numerology: 4
Moon in Libra
Moon Void of Course 3:57 P.M. PST
The Death card is a card that appears when something is put to rest peacefully. If you feel that things have been a little spooky lately, it’s because our Wheel is the year is a little corked this year. We’re feeling the Samhain energy strong a little early because on 10/31/18 Pluto will cross the ecliptic, taking what needs to buried with it to rest. Sun sextile Jupiter at 5:10 A.M. PST is a lucky transit that blesses anything that happens under it. Everything will go smoothly today so know that everything that no longer serves you will fall away. Sun trine Pluto at 8:27 A.M. PST is a life changing transit. This is a good time to study and investigate. Moon square Pluto at 3:57 P.M. PST is a transit that will show you what you really want. The Moon is in the karmic sign of Libra all day but she does go Void of Course at 3:57 P.M. PST. You’ll know what lesson you have to learn. The number of the day is 4, a number of stability.
Mantra: It’s time to cross the threshold. 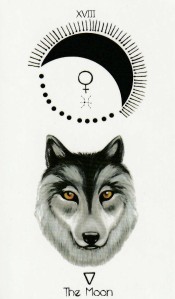 Wednesday 09/12/18 The Moon
Numerology: 5
Moon Enters Scorpio 11:15 A.M. PST
The Moon is a card of light in the shadows. If you catch a glimpse of the other side today, it will only add to the mystery. Jupiter sextile Pluto is a life changing transit that will show you the meaning of freedom through regeneration. A big change may be brought on by chance, but if this happens, it will be in your favor. Venus opposition Uranus at 2:01 A.M. PST brings exciting but sudden events in love. Get ready to have an adventure. Moon square Mars at 11:52 A.M. PST is a transit that may bring high tensions, especially in love relationships that have some cracks in their foundations. These tensions may burst during Moon opposition Uranus at 2:50 P.M. PST. Moon conjunct Venus at 3:31 P.M. PST is a transit assures us that this has been a long time coming. Moon sextile Saturn at 3:46 P.M. PST brings a sense of duty to those you love and Venus sextile Saturn at 8:58 P.M. PST only strengthens that feeling. Acts of love and service performed under this transit will bring deep satisfaction. The Moon begins the day void of course in the karmic sign of Libra, bring delayed reactions to past actions but watch out for the Scorpion sting if you haven’t acted fairly from 11:15 A.M. PST onward. The number of the day is 5, a number of overcoming challenges.
Mantra: Love me by the light of the Moon.

Thursday 09/13/18 The Tower
Numerology: 6
Moon in Scorpio
The Tower is a card that foretells a sudden flash of light. What is illuminated now that was not before? There are also many storms in the oceans now so this may also allude to severe weather. Moon sextile Mercury at 1:20 P.M. PST is a transit that will bring flowing communication. Moon trine Neptune at 1:51 P.M. PST is a transit will be a good time to brainstorm. You may be surprised what you come up with. However, review the notes later because Mercury opposition Neptune at 6:32 P.M. PST may bring confusion due to the amount of information you may be asked to absorb. Work carefully and do not make any important decisions at this time. Moon sextile Pluto at 8:58 P.M. PST is a transit that will bring deep feelings that invoke the love of the mysterious. Moon conjunct Jupiter at 9:33 P.M. PST is a transit that will bring good feelings and generosity so help those in need and receive any help offered today. The Moon is in the intense sign of Scorpio so prepare for storms. The number of the day is 6, reminding us that united, there is nothing we can’t overcome.
Mantra: Alone we can do so little. Together we can do so much.

Friday 09/13/18 2 of Wands
Numerology: 7
Moon Void of Course 1:54 A.M. PST
Moon Enters Sagittarius 5:45 A.M. PST
The 2 of Wands is a card of realizing your power. Now that you know you have the world in your hands, what will you do with the knowledge? Moon sextile Mars at 7:23 P.M. PST is a transit of bravery and leadership. The Moon enters Sagittarius at 5:45 A.M. PST so this will be a day of action, not of rest. The number of the day is 7, a number that reminds you to trust your intuition and follow your gut.
Mantra: I can do anything I set my mind to. 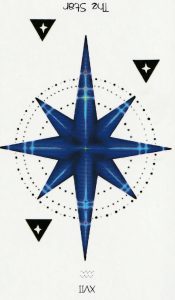 Saturday 09/14/18 The Star (Reversed)
Numerology: 8
Moon in Sagittarius
The upright Star is a card of hope but when reversed, you may understand why the morning star is known as the fallen. Mercury trine Pluto at 7:52 P.M. is a transit of looking beneath the surface to find the deeper understandings of your inner workings. Your shadow self may be strong today. Moon square Neptune at 10:13 P.M. PST is a transit that will find you lost in fantasies and illusions. Trust in yourself and the rest will follow. The Moon is in the energetic sign of Sagittarius giving you the fire to light the way across the night sky. The number of the day is 8, reminding you are deserving of everything that you have.
Mantra: Your strongest opponent is yourself. 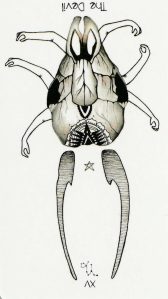 Sunday 09/15/18 The Devil (Reversed)
Numerology: 9
First Quarter in Sagittarius 4:15 P.M. PST
Moon Void of Course 4:15 P.M. PST
I always read the Devil reversed as return to Eden. Mercury sextile Jupiter at 4:51 A.M. PST is a transit that gives you the ability to see the big picture and plan for the future. Moon square Mercury at 7:48 A.M. PST is a transit that brings miscommunications. Moon square Sun at 4:15 A.M. PST brings the challenges of the first quarter. Because it occurs in Sagittarius, these challenges will be related to your ego. The number of the day is 9, a number of near completion.
Mantra: When you point your finger, four fingers point back at you.

Magdalena Tarot does not claim the rights to any of the Tarot card images used here. All images are property of Jillian C. Wilde from the Naked Heart Taort