ASTROLOGY AND TAROT: A DIALOGUE OF SEQUENTIAL AND NONLINEAR THOUGHT  By Sensei Erwin L. Rimban

Another guest blog post by Sensei Erwin L. Rimban to keep you busy while I’m on vacation this week 😉 If you’d like to guest blog for Magdalena Tarot, please go here.

ASTROLOGY AND TAROT: A DIALOGUE OF SEQUENTIAL AND NONLINEAR THOUGHT

Astrology is an esoteric theory of personality that seeks to unlock the potentials of humanity through cultivating an understanding of the archetypes that define the soul. On the other hand, the Tarot is a meditation and visualization tool that that unlocks the potentials of a given situation through an inspired interaction with the power of symbols. The purpose of this reflection is to understand the power of both esoteric systems to unlock the powers of the rational and the intuitive minds, thereby achieving psychic and emotional balance and facilitating self-actualization.

Astrology creates an understanding a structure that unfolds from the chalices of spontaneity. The Four Elements are highlighted. Fire signifies energy and passion. It holds the necessary energy to be translated into action through enthusiasm. The three Fire signs in Astrology are different ways of expressing this drive. Aries is incipient fire that seeks to express itself in the environment as the singularity’s penchant for excellence; Leo is a stable fire that seeks to enthrall its audience with its radiance and brilliance; and Sagittarius is multi-potential fire with its ability to express itself in various environments. Within the wonderful symbolic world of the Tarot, the elemental power of Fire is given articulation with the Suit of Staves. We can see the dynamic development of this theme of energy expressing itself from the Ace of Staves to the King of Staves. The Suit of Staves is all about energy trying to express and manifest itself in the planes of matter in various conditions of being. So we can clearly see the thematic correspondence of the astrological fire signs with the various depictions in the Suit of Staves of the Tarot. Such thematic correspondences also occur with the other elements.

The Air Signs in Astrology encourage us to contemplate the powers of the Mind and its capacities for permutation, computation, analysis, meditation, discrimination and synthesis. In addition, we are also encouraged to reflect on the various ways the Mind expresses itself, such as the various linguistic systems, as well as the various mathematical, statistical and computational languages. Gemini as polarity, Libra as symmetry and harmony of thought and Aquarius as the openness to unconventional modes of thought are Natal Astrology’s portals to understanding the verities of the Mind. Similarly, the Tarot develops a similar theme as well, because the powers and capacities of the Mind are celebrated, conveyed and exemplified by the Suit of Swords. Beginning with the Ace of Swords and culminating with the King and Queen of Swords, this Tarot suit encourages us to enter the portals of the Mind, understand its peculiarities, comprehend its strengths and weaknesses, and learn the various ways the Mind expresses itself while exploring the planes of matter. Both Astrology and Tarot extol and celebrate the power of the Mind. But, at the same time, these two legendary esoteric systems caution us against using only facet of the mind, like the rational mind, thereby limiting and disregarding the other facets like the intuitive mind. Instead, both Astrology and Tarot encourage us to use both reason and intuition to achieve a state of true mental balance.

Going farther, we enter into the realm of the Water Signs in Astrology. We realize that this is the veritable realm of relationships, networks, and associations. No man is an island, indeed, and the Water Signs remind us that true balance, harmony and inner peace can only be gained by harmonizing ourselves with our relationships. Cancer, Scorpio and Pisces are signposts of symbiotic intelligence. But they emphasize different ways of achieving harmony and symbiosis. Cancer seeks a state of harmony with its native environment. Scorpio seeks a state of harmony with its conjugal environment. And Pisces seeks a state of harmony with all possible environments, especially those that signify union with a transcendental state. Amazingly, the lessons of these three zodiac signs also resonate very well with the Suit of Chalices or Suit of Cups in the Tarot. Starting from the Ace of Chalices into its culmination in the King and Queen of Chalices, the Fool archetype in the Tarot journeys in wisdom and compassion and love by acquiring the values and virtues extolled by the elemental power of Water. Those who study Astrology and Tarot deeply would soon realize that the more we work hard in understanding, improving and enhancing our relationships with other people, the more we shall achieve harmony and happiness in our lives. And so, indeed, in this area, Astrology and Tarot once more combine to bring these essential lessons to us, although they convey them in a highly symbolic and arcane language, compared to such fields as the social sciences. 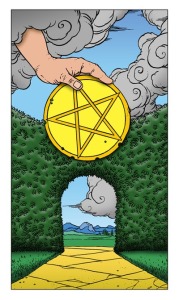 The final element, Earth, also shows characteristic similarities in the lessons offered by both Astrology and Tarot. The Earth Signs in Astrology, Taurus, Virgo and Capricorn, challenge us to understand the material world in all the ways possible so that we can use this world as a template to enhance our lives and achieve our fullest potential. In the same way, the Suit of Pentacles in the Tarot echoes this sentiment. From the Ace of Pentacles to the King and Queen of Pentacles, the lessons are hard and unforgiving, but beneficial and rewarding in the long run. Values and virtues such as diligence, persistence, determination, focus, concentration and self-reliance are absolute qualities to have in order to succeed in the material realm. These same lessons have long been articulated by Astrology. Taurus, Virgo and Capricorn all encourage us to work on our weaknesses, harness our strengths, focus our talents, and diligently work on our goals if we are to succeed in the long run. Once more, Astrology and Tarot are in the same wavelength in their advocacy to teach mankind the rudiments of long-term success. Such advocacies can only benefit a human in the long run, whether financially, professionally or socially. These same lessons are also the same postulates long held by psychology, management and the social sciences as the paths to success and self-fulfillment.

Astrology and Tarot, as esoteric systems, both unfold Order from within Chaos. But they do so in slightly different ways. Astrology is a linear system of absolute logical consistency. It has an alphabet, a grammar to understand the ways of combining these different alphabet forms and a system of prediction to understand how the alphabet influences the dynamics of individuals as they unfold their lives through space and time. The alphabet of Astrology is, of course, the twelve (12) basic zodiac signs: Aries, Taurus, Gemini, Cancer, Leo, Virgo, Libra, Scorpio, Sagittarius, Capricorn, Aquarius and Pisces. These are twelve possibilities which can be combined in infinite ways to present more possibilities in space and time. The permutations of the zodiac signs in Astrology are truly immense. The twelve zodiac signs are simply templates of a very basic kind. Enter the planets, and the aspects between the planets, and the narratives and plot lines that can ensue from the combinations of these planets in the various signs, with the aspects between them, are truly staggering. A natal chart is a unique representation of reality, individuality and potential all merging together in one moment in time.

On the other hand, the Tarot is also an esoteric system of vast proportions. It is a cathedral with an almost infinite number of mansions. The Major Arcana of the Tarot alone is a system with 22 archetypes, beginning from the Fool archetype and culminating in the World Dancer archetype. Add to this the Minor Arcana of the Tarot with is 56 symbols of self-transformation and we have a living nonlinear system with an almost infinite number of permutations. The tarot reading environment, which is actually a contemplative and counseling environment, is an intersection of Art, Symbology, Philosophy, Metaphysics, Hermeneutics, Quantum Physics, and Linguistics with a dash of Music. The moment is charged with awesome potential, whereby the Tarot counselor and the client unfold timeless lessons from the mysteries of the Cosmos.

In conclusion, Astrology and Tarot are both extremely powerful esoteric systems for self-understanding and self-realization. Astrology is sequential, logical and mathematical. Yet within its boundaries of sequential thought lie uncharted areas on Nonlinearity whereby the art of the astrologer can derive valuable lessons for a client. On the other hand, the Tarot is nonlinear, existential and symbolic, but within its manifold chambers we can find areas of structure, logic and reason. As esoteric systems, both Astrology and Tarot continue to present Humanity with alternative ways of understanding itself. They are doors to the Wisdom of the ages, the legacy of thousands of years of Seeking and Pathfinding.

Sensei Erwin Rimban was born in the Philippine Islands. Since a young age he has been fascinated by the esoteric realm and avidly read books on world history, philosophy, astrology, mythology, the social sciences and similar fields. Educated at the University of the Philippines, he added Evolutionary Biology to his plethora of interests. After graduating from college, he spent many years in the tourist destination of Baguio City where he pursued a career in writing and teaching, while at the same time finding time to be a meditation teacher. His hobbies include chess, poetry and Tarot counseling. Currently, he is active in organizational work, where he is promoting advocacies in educational philosophy, spiritual counseling, and environmental issues.

Tarot card images from the Evolutionary Tarot by Richard Hartnett

3 thoughts on “ASTROLOGY AND TAROT: A DIALOGUE OF SEQUENTIAL AND NONLINEAR THOUGHT  By Sensei Erwin L. Rimban”